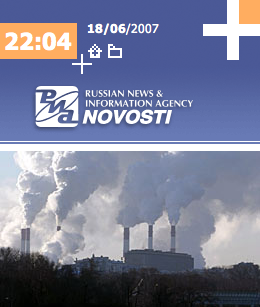 MOSCOW. (Yury Izrael for RIA Novosti) - I think the panic over the global warming is totally unjustified. There is no serious threat to the climate.

There is no need to dramatize the anthropogenic impact because the climate has always been subject to change under the Nature's influence, even when humanity did not even exist.

Our institute has calculated that if all fuel that has been produced and discovered were burnt in several hours, the concentration of carbon dioxide (CO2) would increase by about 800 ppm (parts per million). This is the ceiling beyond which we won't climb. But even this figure is not sensational - in the Carbonic period some 350 million years ago the Earth had several thousand ppm (10 times more than now). This time was marked by the rapid growth of vegetation that has left us with huge coal reserves. Study of the ice core recovered by Russian scientists from deep Antarctic holes has revealed that in the last 450,000 years the Earth has had at least four peaks of temperature upsurge with fluctuations of 10 to 12 degrees.

We also know the bottom limit - complete icing, that is, the "white ground" when the level of CO2 concentration was insignificant - less than 200 ppm. Judging by the Antarctic core samples, icing occurred once in 100,000 years. CO2 indicators changed from 200 ppm to 350 ppm. Interestingly, with today's 379 ppm we are close to the bottom limit. Hypothetically, we are more threatened by the cold than by the global warming.

But the world is concerned with global warming and its potential consequences. The forecast for the current century predicts an average rise by 2.5 C-3 C (with extreme limits from 1.4 C to 5.8 C). The ocean level is supposed to rise by 47 cm. I don't think this poses a global threat to humanity. Of course, some lowlands and ports may face a problem, but new pierces will be built and people will live on the higher ground.

Scientists from the British Hadley Centre have discerned another global menace in Greenland's melting ice. They believe that if the temperature goes up by three degrees, it may wither away in three thousand years. In recent calculations, considerable melting of the Western Antarctic and Greenland's ice sheet may occur in many centuries or several thousand years. Some predicted a change in the Gulf Stream current that would considerably lower the temperatures in Scandinavia but the Intergovernmental Group of Experts on Climate Change (IGECC) and the Intergovernmental Panel on Climate Change (IPCC) have not confirmed this hypothesis.

In recent calculations, the average temperature increase stands at 0.74 C. It is believed that this is enough to generate negative processes but there exists no scientific proof for many of these.

Meanwhile, way back in 1974 Russian scientist Mikhail Budyko came up with an idea that may resolve the global warming problem in several years. The gist is to change the "meteorological sun constant" by introducing into the lower stratosphere (at an altitude of 12km-16km) fine dispersed aerosols of sulfuric acid, for instance. This will decrease solar radiation on the Earth's surface and reduce the temperature in the troposphere by the required number of degrees. This is an instrument of climate change.

I would like to note on the margins that in the fall of 2005 I published an article with concrete proposals based on that method, and gave dozens of interviews. Some of my colleagues supported the idea, while others were skeptical. But in the end of 2006 I read an article by Noble Prize winner Paul J. Crutzen, a Dutch chemist and meteorologist, who described exactly the same proposal but without any references to Yury Izrael.

Today, the main goal is to stabilize the climate at today's level or the level of the pre-anthropogenic period (before the industrial revolution) - at 280 ppm. There are many changing parameters that affect the radiation flow, and hence, the climate. Hothouse emissions have the strongest impact. They have increased the radiation flow, which is believed to have raised the average temperature at the Earth's surface by 0.6 C - 0.7 C.

There also exist other "culprits" that may both warm up the air or cool it off. The worst are the hard aerosol particles generated by industrial plants, planes, volcanoes and dust storms. I suggest that we should not bother about CO2 that does not seriously threaten the climate. Instead, it makes sense to decrease solar radiation by 0.3%-0.5%. Stratosphere-based aerosols have the biggest capacity of weakening solar radiation. In tentative estimates, in order to bring down the temperature in the troposphere by one degree, it is necessary to throw into it about a million tons of aerosols or burn 300,000 tons of sulfur.

We could either introduce sulfur into the troposphere by a special method, or supply high-altitude aircraft with high-sulfur fuel. These measures will bring down the troposphere temperature very quickly - in two to three years.

But what will happen to artificial aerosols with a stratosphere life span of one to two years? They will be drifting in space, gathering in broad bands - from 30 degrees to 70 degrees latitude. These bands will offer some protection of the Earth from solar radiation. Will it have an adverse effect on the biosphere and human health? Calculations show that a decrease of solar radiation will be less than one percent near the Earth's surface. This regularly occurs after big volcano eruptions and does not threaten life on Earth. The amount of aerosols that will eventually subside on the ground will be 0.2 mg of sulfur per square meter a year. This is about 1,000 times less than what usually comes with industrial emissions, rain and snow.

Importantly, such actions tally with international agreements, such as the 1978 Soviet-American Convention on the Prohibition of Military or Any Other Hostile Use of Environmental Modification Techniques. They are not aimed against any countries but are designed to deal with the climate change -- a global challenge.

The United Nations adopted a Framework Convention on Climate Change in Rio de Janeiro in 1992. Its main goal is to stabilize hothouse emissions in the air at the level that would pose no danger of anthropogenic impact on the climate. In 1997 the convention was supplemented with the Kyoto Protocol under which industrialized nations decided to reduce hothouse emissions on their free will by an average of 5.3% from 2008 to 2012. The document focused on hothouse emissions that have the greatest impact on the climate. But it transpired before long that it will take a lot of time to decrease the anthropogenic pressure by reducing CO2 and other hothouse emissions in order to stabilize the atmospheric level, and that the industrialized countries were not likely to cope with this task on their own. Moreover, in IGECC's estimate it will require tremendous spending - up to $18 trillion during this century. The method of aerosol impact on the stratosphere is much cheaper, hundreds of times faster, and, if need be, can be easily stopped.

It goes without saying that this method should be approved by the world community. For the time being, Russian scientists are working at home - making detailed calculations for further tests.

Academician of the Russian Academy of Sciences, Yury Izrael heads the Institute of Global Climate and Ecology.

The opinions expressed in this article are the author's and do not necessarily represent those of RIA Novosti.

This page updated or reviewed in April 2010