This is for the latest 12 months, compared to the same perods in each year. It is not year-to-date compared to other whole years, but rather 12 months ending one month compared to that same period since records began. 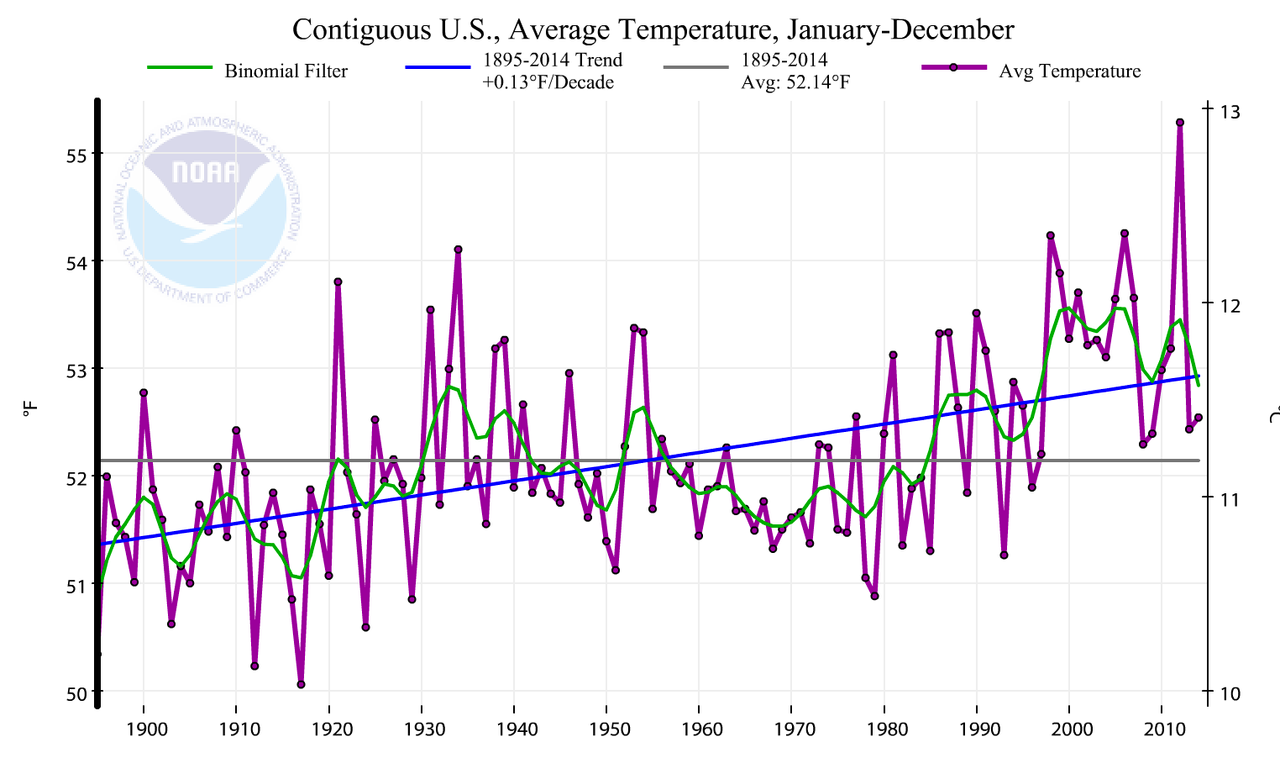 Analysis: The US temperature has retreated to the 20th century average. It stands at 2 deg F (.9 deg C) below the 1934 high. If we use a 75 year record, we can argue that there is rapid cooling, just as as strongly as those who use a 30 year or 50 year record to promote warming. If the advent of thermometers in the late 1800s had not coincided with the end of the last Little Ice Age, there likely would be far less evidence of any warming at all.

The projected temperature rise by IPCC is unrealistic, given that the USA and global temperatures have risen by only 1 deg F (.5 C) in 100 years (revised, NOAA, 1 May 2007 ), (or 150 years using the full instrumented data set) during the height of industrial expansion. Even if all this rise is correct, and is attributable to human causes, it is a trivial amount in the natural variation of the Earth, and to suggest the rise would accelerate 5 fold (IPCC best estimate) in this century is incredible. Even after the release of the new data set and procedures by NOAA, which addressed some of the urban heat island issues and dropped the warming 44% (below IPCC 2007), significant other urban heat island issues still remain. There are also issues of calibration as measurement protocols have changed, issues about the design and placement of the temperature stations, and even the strongly held view by many skeptics that this is a natural rise as the Earth recovers from the Little Ice Age (circa 1500-1900).

The table below summarises some of the differences in various weather elements in urban areas compared with rural locations (Source: British Met Office).

The formation of a heat island is the result of the interaction of the following factors:

The precise nature of the heat island varies from urban area to urban area, and it depends on the presence of large areas of open space, rivers, the distribution of industries and the density and height of buildings. In general, the temperatures are highest in the central areas and gradually decline towards the suburbs. In some cities, a temperature cliff occurs on the edge of town. This can be clearly seen on the heat profile below for Chester.

The Urban Heat Island (UHI) describes the increased temperature of urban air compared to the rural surroundings. The term ‘heat island’ is used because warmer city air lies in a ‘sea’ of cooler rural air.

The figure below shows a stylised heat island profile for a city, showing temperatures rising from the rural fringe and peaking in the city centre. The profile also demonstrates how temperatures can vary across a city depending on the nature of the land cover, such that urban parks and lakes are cooler than adjacent areas covered by buildings.

Sketch of an urban heat island

Source of chart and text: The Met Office

The higher urban temperatures are caused by the increased capacity of the urban land surface (eg. roads, buildings, pavements) to absorb and trap heat.

This results in towns and cities remaining noticeably hotter than the surrounding countryside, particularly at night on calm, clear summer nights. The UHI can add 5-6°C to the nighttime temperatures experienced. During the summer heatwave of 2003, differences of up to 9°C between city and rural temperatures were measured in London.