Context: sun spots have been reliably counted and recorded since the early 1500s. There have been many linkages to little ice ages and general temperature trends, but they have not been used in climate change modelling science because the mechanism through which sunspot activity affects the Earth's temperature is unknown, despite the high correlation. Sunspots are areas of intense magnetic storms that actually cool the sun's surface. However, science is closing in on the mechanism underlying the relationship between sunspots and our climate. Sunspots may disappear completely, per NASA. Click the photo for today's image to compare with a clean sun (24 March 2009). 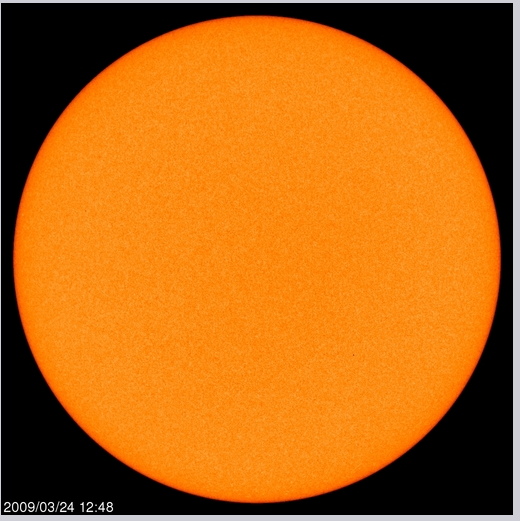 Analysis: The two major recorded mini ice-ages, the Maunder and the Dalton Minimums began at sunspot minimums comparable to the present. Among the climate skeptics, this has been discussed for years. As the sun remains unusally quiet, perhaps the world will better recognize that the threat from cooling is far more ominous and urgent. This author believes that sunspots must not be ignored simply because they do not fit into a CO2-based model.

A sunspot is a region on the Sun's surface (photosphere) that is marked by intense magnetic activity, which inhibits convection, forming areas of reduced surface temperature. They can be visible from Earth without the aid of a telescope. Although, they are at temperatures of roughly 4,000–4,500 K, the contrast with the surrounding material at about 5,800 K leaves them clearly visible as dark spots, as the intensity of a heated black body (closely approximated by the photosphere) is a function of T (temperature) to the fourth power. If a sunspot were isolated from the surrounding photosphere it would be brighter than an electric arc.

A minimum in the eleven-year sunspot cycle happened during 2008.[1] While the reverse polarity sunspot[2] observed on 4 January 2008 may represent the start of Cycle 24, only a few sunspots have yet been seen in this cycle. The definition of a new sunspot cycle is when the average number of sunspots of the new cycle's magnetic polarity outnumbers that of the old cycle's polarity[citation needed]. Forecasts in 2006 predicted Cycle 24 to start between late 2007 and early 2008, but new estimates suggest a delay until 2009.

Sunspots, being the manifestation of intense magnetic activity, host secondary phenomena such as coronal loops and reconnection events. Most solar flares and coronal mass ejections originate in magnetically active regions around visible sunspot groupings. Similar phenomena indirectly observed on stars are commonly called starspots and both light and dark spots have been measured.